When you can’t get close enough to see something well—a street sign, or an elephant at the back of the zoo enclosure—a monocular can be great to tool. But getting them to work in the bright outdoors can be tough. When we first started trying, my daughter found monoculars unusable outside. Without her glasses it would be too bright. But with them she couldn’t see either.

The problem seems to be twofold: first even with the eye cups rolled down for use with glasses, my daughter’s glasses keep the monocular away from her eye, reducing her field of view. That makes finding what she is trying to look at that much harder, which is difficult enough for a small child. Second, a monocular already cuts out some light. So with her regular outside glasses and the monocular both blocking light, it was actually too dark for her to see. But looking through the monocular with her inside glasses was still too bright.

After much trial and error, we finally hit upon a solution that works. We got two 8×20 monoculars from the Carroll Center store, pretty much the same as this one that you can get at MaxiAids. (Actually one is 8×20 and the other 8×21 as we bought them at different times and the models changed. 8x is the magnification, 20mm is the objective lens diameter. They have a 7.2° field of view.) 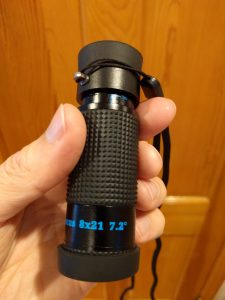 Next, and this is the important part: We found that NoIR lens #570 39% Dark Red/Orange is just right for use with this monocular. We went outside on a sunny day at the Carroll Center with the monocular and a full set of NoIR lenses. This is the NoIR filter that when held over the end of the monocular let my daughter see. It makes sense too—it is the one that my daughter found to be too dark inside but too light outside when used on its own. Apparently that makes it a perfect complement to this particular monocular.

Then the solution is to cut down a NoIR #570 lens to the diameter of the monocular and use superglue (the gel kind, not the runny kind) to glue the NoIR lens over the end of one of the monoculars (the end you put your eye to seemed best). 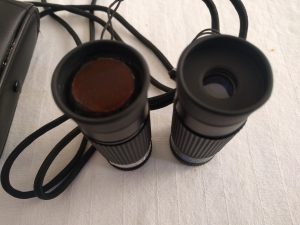 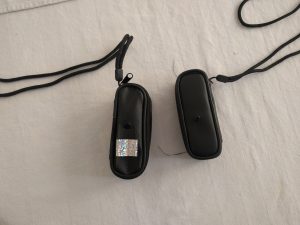 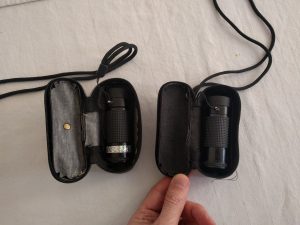 Now my daughter uses it every week during her O&M lessons. Moreover, we’ve finally stopped losing them  (knock on wood) since (not shown in pictures) we now have a lanyard attached to both the monoculars and the cases, and the cases have key-tags with our phone number attached.

The only difficult thing about the solution is cutting down a NoIR lens to the right size. Luckily my father did it for us and shared directions on how you can do it yourself.

Directions for cutting a NoIR lens down to size from a Frame #L ordered in Filter 570 for use with a monocular:

Process: Stick a strip of tape to sheet. Draw two circles with the sharpie by drawing around quarter with sharpie, keeping pen vertical so that the line is not too tight on the quarter. Cut out circles, peel tape off sheet; choose a good place on NoIR glasses, stick disks to both sides at the same place. Not too difficult to line both circles up as you can see the other side, and if it is not right, tape peels off for another try. 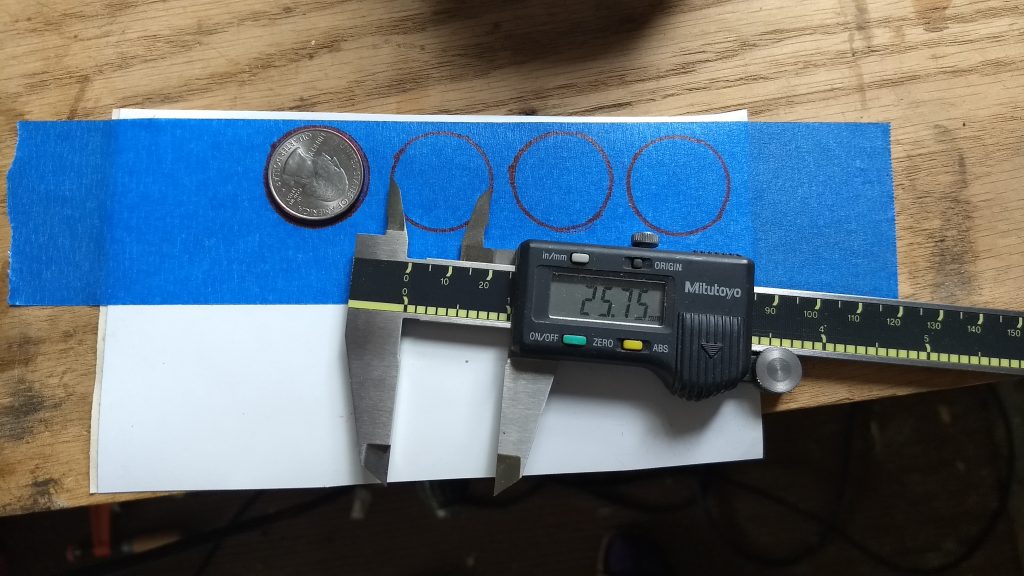 Note: Pictures show more tape circles than listed in the directions. My father was making more than one disk to allow for mistakes. Also, a quarter was the right size for our monocular model and target 26mm diameter disk. You may need to adjust for your own monocular dimensions.

Materials: Dremel multi-max oscillating tool with semi-circular saw blade. (You can get recondition models on amazon for approximately $50 for the saw and $15 for the blade. If you don’t want to get a Dremel tool, you could try a hand saw.)

Process: Hold the saw in a workbench vise so your hands are free to hold the NoIR frames. Moving the frames around, cut out the disk as a square and then trim it to an octagon. 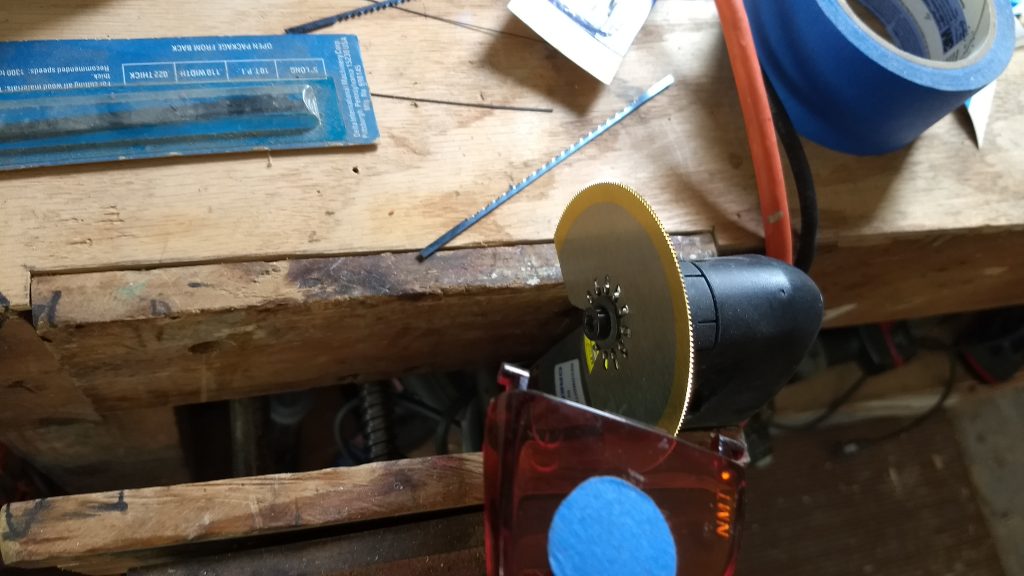 Dremel tool with semi-circular blade mounted in vase. Noir frames with blue tape circle being held near blade for cutting.

Safey Note: The oscillating saw set up in the vise looks dangerous, as it has a completely exposed saw blade, but it doesn’t cut soft fingers, they just oscillate along with the saw. But it likely would cut fingernails so don’t try it. 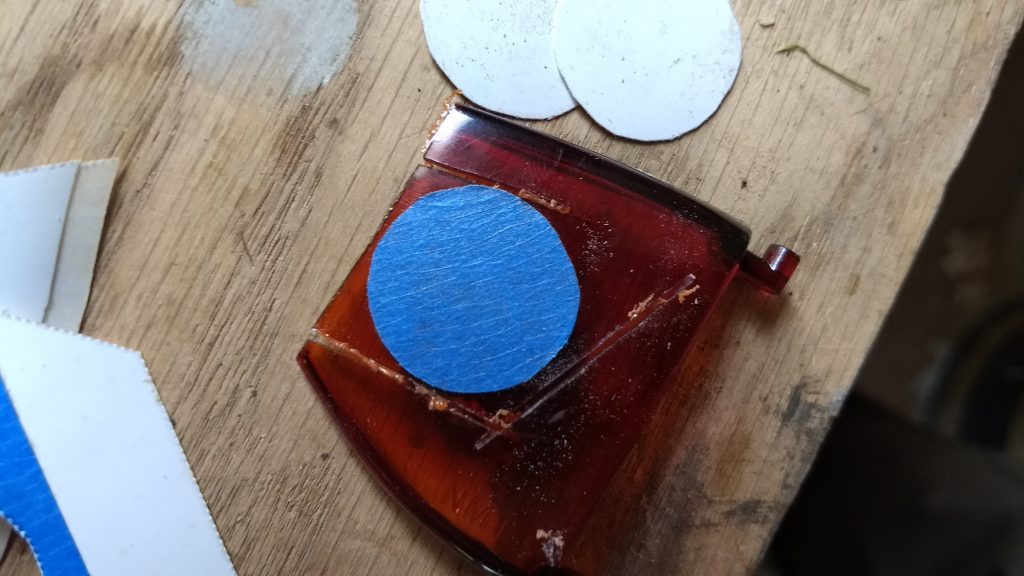 Materials: Belt sander (for convenience, it is speedy), with 80-100 grit sandpaper.

Process: Hold the sander upside down in a vise. Touching the octagon lightly to the moving belt, sand off the corners to get a rough oversize circular disk. 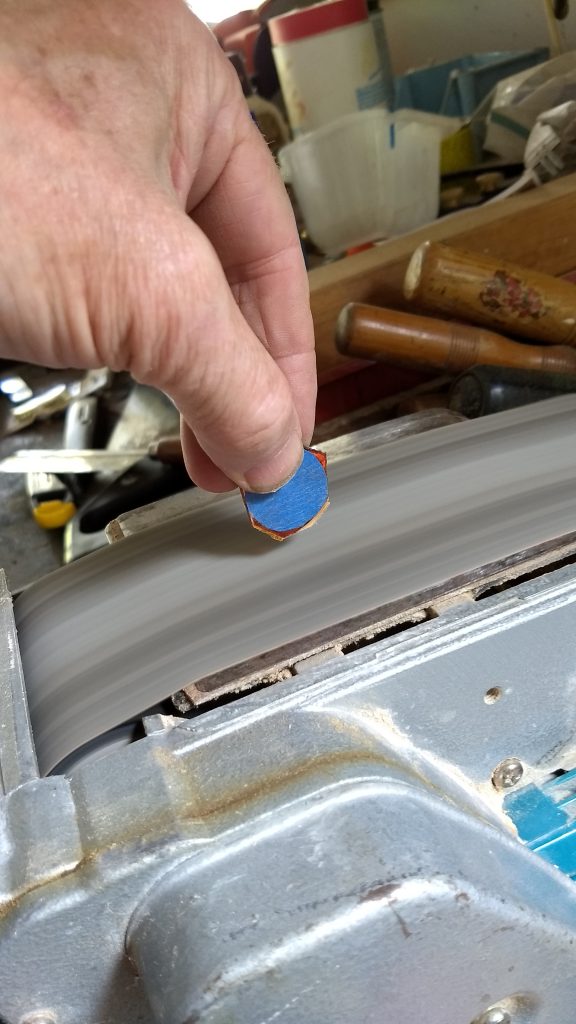 Sanding the corners off the disk using a vise-mounted belt sander.

Note: If you don’t have a belt sander, then skip to step 4. This just speeds up the process. Note this is likely the most dangerous step, which could be another reason to skip it and take more time with step 4.

Process: Again hold the sander upside down in a vise. Rotating the disk as it touches the sandpaper, sand down to size. Check for size and being circular with the calipers. If using the same monocular model we used, 26mm is the right diameter, but this will likely vary by model.

Step 5) [Optional] Peel off the painter’s tape; replace with two slightly smaller pieces (to protect the lens while leaving the edges clear to be cleaned up). Clean up the edges where the sanded side meets the optical surface with a knife/scraper.

Note: Experience showed this step was not really necessary, as step 4 left a pretty clean edge.

Process: Remove tape from the lens disk. Apply superglue in a circle around the eye piece lens. Glue the NoIR lens on and hold a few seconds until glue tries. I used gel superglue so that it would not run and coat the center NoIR lens or the moncoular lens which are used for viewing.